DragonCon is a yearly event for me. I love this convention. There are so many dedicated fans, and industry that travel to Atlanta every year just to come to DragonCon.

If you have never been to DragonCon and are thinking about going, definitely ask some people you know who have gone. There are so many amazing costumes and people there, but that also means there are lots and lots of people. This never seems to bother me, but had I not known to expect it when I first went to DragonCon, then I may have been a little overwhelmed.

This year (like most years) had lots of amazing guests. I was most excited for John Barrowman (Capt. Jack <3), his sister Carole Barrowman, Peter Davison (which The Girls Who Waited were lucky to sit in on an interview, link at the end of the article), Sylvester McCoy, George Takei, as well as many others.

Friday at DragonCon was incredibly interesting, my travel companion had an infected tooth, so sadly I did not get out onto the convention floor until that afternoon. However once I did, I participated in a CNN article about cosplaying (sadly did not make the article, but went in my Wonder Woman cosplay for it), looked around at all the amazing costumers, and handed out lots of cards for The Girls Who Waited. 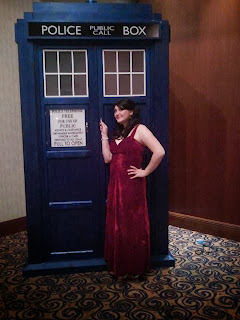 Saturday was a lot more fruitful for me, I got out early to attend the Sylvester McCoy press conference (sadly it was cancelled), Sat in on, on two panels, a British Costuming Panel, and a Doctor Who Cannon panel. Both of which were marvelous and I was so happy to be apart of them!  Was also happy to be the only female on the Doctor Who Cannon, which I am happy they had a ladies view represented on the panel, since there were six panelists on it. I then attended a few photo shoots (the League of Legends Photo shoot). Then later that night I attended the Troma panel, which is always fun to see the movie clips as well as some of the how to make a movie style clips that they film. 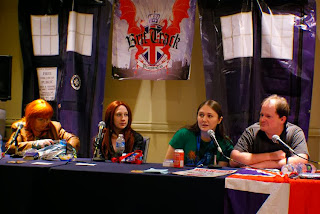 Sunday I was up early to do a photo shoot, one of the photos will be part of the book "Breaking all the Rules: Cosplay and the Art of Self Expression" It will be out in November, and a few of the images used were taken at DragonCon or around the hotels at some of the scenic areas!
Once I was finished with the photoshoot, I went and got some of my ElfQuest books signed and talked with the Pini's for a bit, they are fascinating people and incredibly nice! I really hope that they are invited back next year, especially with the new ElfQuest comic being released by Dark Horse (I was unable to make it into their panel due to the sheer amount of people attending). 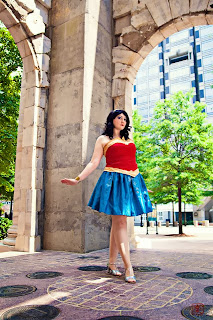 Monday I sat in on the British Fans on the Net panel, happy to not be the only female this time, since half the panel was ladies! It was incredibly fun to talk about getting into youtube/podcasting, and hear how others also got into it as well as what equipment they use and how they plan their filming/recording of their shows. The panel was filmed and will be put up on Earth Station Ones podcast as their DragonCon coverage in the next few months. I then ran over to the main hotels (since it was raining a bit) and shot a Girls Who Waited episode with Lydia, wish we could have shot more together, but between her working and me covering the convention and being on panels, our schedules just did not meet up.

Once all my panels were over I headed back over to the dealers area, which I was unable to look through when I got the Pini's autographs earlier. The dealers room was well laid out, but still a bit hard to find since it was in a new location this year, I will say I miss it being in the hotels. I was able to check out the Bruteforce Studios booth, which always has lovely leather items. The Troma booth, the Fine booth, as well as many others, it is always interesting to see what dealers have each year.

Then it was back to the hotel to get our bags and head to the airport! A wonderful time and a wonderful convention! Cannot wait until next year!

I want to than the DragonCon Media Relations for allowing The Girls Who Waited attend as press this year!


The Girl Who Waited DragonCon 2013

The Girls Who Waited

Breaking all the Rules: Cosplay and the Art of Self Expression