I had an AMAZING Thanksgiving Holiday! I always travel to my grandmothers in Charlottesville, Va. with my parents and we have a great family dinner with my Grandmother Pritchett, my Uncle, aunt and their son. We will also occasionally see my aunts daughters and son as well (depending on where they do Thanksgiving that year).
Dinner was amazing! I got to spend lots of time with my family that I love so much! I got to eat some incredibly yummy food and be lazy!
Well this year a lot of stores for  Black Friday decided to open at midnight.  So I was like, well I'm up, Ill go hit up the four stores I really wanted to go too, Best Buy, Old Navy, Ulta and Sephora. So at midnight I went out, made it to the two makeup stores and got some good deals (which I do not get until Christmas, since my parents were awesome and got me some great makeup super cheap).  I then headed to best buy and got some awesome stuff! (Camalot season 1 for $7.99 and Smallville Season 10 for $9.99), then on to Old Navy for some jeans, boots and two really lovely tops! By then it was 3am and I went home to sleeeeep! Later that day we also headed to Walmart and Target where Lego Batman 2 was obtained and Downton Abbey Season 1 was purchased by my father and Vampire Dairies seasons 2 and 3 were bought with a gift card that I received back when I graduated from grad school (yay for me just not shopping a lot at Target!).  I was really pleased with what was bought this year, and all for well under $200 (including what I got with the gift cards) yes my parents paid for most of that, but my father is going to enjoy some of the Tv dvds (well maybe not Vampire Dairies) as much as I will. 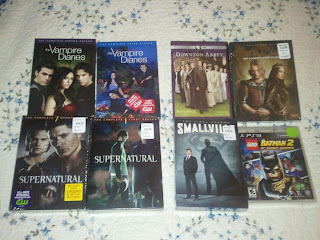 Saturday it was back to the D House to do makeup for Scary Stories to Tell in the Dark episode two "The Walk" Mariah and I always get to do some pretty fun stuff! I did not get to stay on set the entire time due to lunch with my Grandma Layne and my parents. However I got to stop by the Albemarle Bakery and pick up a thing of French Macaroons, they are delicious so far! Incredibly yummy! They had five flavors (Chocolate, Strawberry, Pistachio, Vanilla, and coffee flavored). 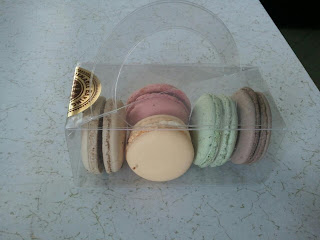 After lunch my father and I checked out the new Trader Joe's that just opened up (got some edamame hummus for us to eat and some fruit strips for lunch next week!) and then checked out Best Buy again, where I then got Supernatural seasons 1 and 7 for 9.99 each (costing me $5 since I had $15 dollars in Best Buy rewards certificates). So because of gift cards and coupons I spent a total of $5 this year for Black Friday (yes my parents spent more buying Christmas presents for me and other members of the family) But I think I did pretty good and beat a lot of the super crazy crowds that everyone seems to dread on Black Friday.
Posted by Angela at 8:34 PM