Blood on the Beach is a first year horror convention that was held in Chesapeake, Va (in the old Nekocon and AMA hotel).  I was really excited to be going to this convention since I had so many awesome films screening! (Porkchops, Plan 9 teaser, Fear Fighter trailer, The Gnome Before Christmas, Scarecrow at Midnight).

Thursday:
I arrived at the convention hotel and met up with Melissa and Joe and chilled out while I waited on Mariah and John to get there since I was rooming with them.  They arrived, we all chilled and had a pretty relaxing Thursday.

Friday:
Found where the Darkstone table was going to be at (a little crazy) and then set up everything with Mariah.  Chilled at the table for the bit then went and searched for the Razor Sharp Studio table! Found the awesome Porkchop banner, chilled out there, visited the awesome Melisa at her booth and just went between the Darkstone and Razor Sharp table.  Friday night got some dinner with the Razor Sharp crowd and my friend Robert and then got some sleep. 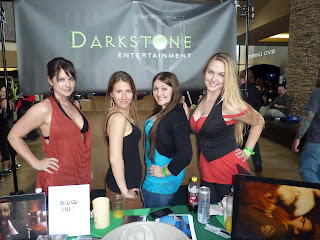 Saturday:
Got up and got all the stuff down to the Darkstone table with the Darkstone family.  Mariah and I did Addy Miller's makeup for the zombie walk.  Then pretty much sat between the Darkstone and Razor Sharp tables.  Went to the Plan 9/ Fear Fighter/ Dante's Inferno screening! Awesome packed room! Sat in on the Ghost Trek screening, then visited with friends in the autograph room, sat at the Razor Sharp and Darkstone tables some more.  After closing up everything table wise, Checked out the concerts going on (Bella Morte, and G Tom Mac) and then Mariah, Elanor and myself went and all put on different wigs and walked around a bit more in disguise!  After that it was time for sleep! (since it was rather late/early....) 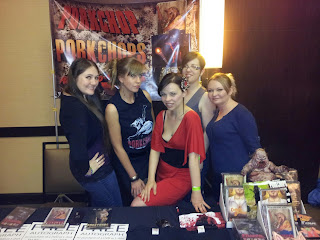 Sunday:
Got the tables all ready, went to the Gnome Before Christmas Screening! and the Porkchops screening, then sold DVD's at the tables.  Also I bought a pretty awesome looking snake bracelet!!  Stayed at the con until the end when everyone was heading out. Packed up the Darkstone booth, and then headed home. Wonderful weekend and wonderful con!! Can not wait until the next one!!! 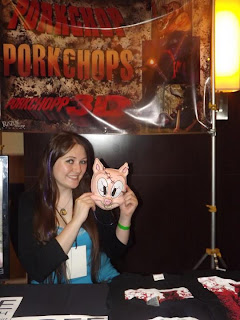 Posted by Angela at 6:31 PM No comments: