This was my first Ravencon. I had known about the con for years, and being from Charlottesville you figured I would have made the trip to the convention at some point. But last year I was filming on Plan 9 during Ravencon and other years it ended up being the same weekend as the DC Cherry Blossom Festival. So I made the trek there this year! However I had been to this hotel! AMA was held here back in the day!

Friday: Made the trip to Richmond.  Checked into the hotel and then headed out for food and Toys R Us, where I found some super cute Kuromi socks on sale!  Then headed back to the hotel and looked around. Saw Kara and a few other people I knew! Went to opening ceremonies and saw Carla's awesome cake she made for the con! Checked out some panels went to some room parties and then headed to bed (since I always get tired after being in a car for a few hours). I did not really get into any costumes on Friday, mostly was me just being lazy walking around in a Doctor Who shirt.

Saturday:
Got up and breakfast at the hotel.  Got signed up for the costume contest. Chilled out with some of the awesome people from Mysticon for a bit, walked around and checked out the dealers room (bought a cute pair of brown and green chainmail earrings) Went to the Doctor Who panel since we were filming it for GPR. Then got into costume for the contest.  I wore my Clockwork Android costume for the contest.  I am SOOOOOOOOO happy they hotel was very well air conditioned. I really dislike the mask at this point after wearing it for so long at Dragoncon and busting a blood vessel in my eye. It is fine for limited wear, but a few hours noooooooo. I had a kid look at me in fear then attempt to pull the mask off my face (old enough to know not to grab and pull at someone, so that was a but annoying) So I did my walk on and off the stage, was a creepy robot, and got BEST IN SHOW! woot! Made my weekend! Was very excited and honored to get best in show! After the contest got out of costume and had dinner with Kara and Rob, then went back to the hotel, hung out at CapClaves party for a bit with Kara, watch some of the Bella Morte concert, and then headed to bed.

Sunday:
Got all packed up, walked around the con center and dealers room (got a cute purple and black chainmail bracelet). Went to the Doctor Who Vs. the Xenomorphs panel, got pulled up on stage to be a panelist for it, So we filmed a GPR episode of it with Billy, Myself and Davey on the panel.  After that said goodbyes and headed home.  Long and fun weekend! 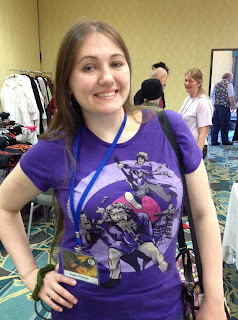 and sadly the only photo I have of the weekend is me in my Doctor The Who shirt. No costume stuff this time :(