Hello Everyone! It has been awhile since I have posted a blog! I have been so busy with work, conventions, filming, family and writing!

I have two short stories that will be in upcoming anthologies!!

First off my story "The Bridge" will appear in Cruentus Libri Press's anthology  "Another 100 Horrors". This is a fun little anthology of 100 stories that are 100 words each. It should be out in Late April or early May, unless the publisher has changed the release time. 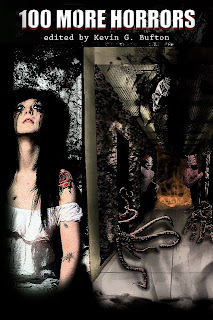 My second story that will be published is a Steampunk Horror story I wrote titled "My Patchwork Girl" it will be released in Horrified Press's anthology "Tales of the Undead: Hell Whore Anthology Vol. 3".  his shold be released in August/September 2013.
Here is a list of stories already in the anthology!


I am super excited about both of these stories, and cannot wait to see them in print!!!

Email ThisBlogThis!Share to TwitterShare to FacebookShare to Pinterest
Labels: Writing