This past weekend I had the pleasure of being a guest for Mysticon! A fantastic convention in Roanoke, Va. I was invited to the convention as a guest (this was my fourth Mysticon.) I arrived at the con in the afternoon on Friday, and went straight to my first panel, a showing of The Nephilim Chronicles, the tv pilot I filmed last year. I then went to my second panel, Budget Costuming, which was awesome and I got to be on the panel with some great costumers!  We talked about making costumes on a tight budget and how to get away with not spending a fortune! I then got a short break (which in that time I got to unload my car, and get into my hotel room.) My last panel for the night was, Moffat: Evil Genius or Evil, Genius. This panel went amazingly! So many thoughts on Moffat and his writing style, how he handles his characters and his stories on the shows he has and is writing. The audience was incredibly awesome in this panel, and helped make the experience of being a panelist on it great! Once my panels were done I went and got food (by this time I was suffering from a pretty bad migraine that had been working its way to maximum intensity all day.) so I sipped on some soup, sat in the dark and then once I was able to go out without feeling ill, I went out and hung out with friends and visited the Congregate and DC17 room parties. While at the parties I got to meet Sean Maher, he was incredibly nice and an amazing guest for the con!

Saturday I was up and ready for my three panels and to judge the costume contest! I started off with a really fun panel on Social Media, and how to use it as a writer and artist (of any form.) My next panel was called Super Heroes Assemble, this panel was AMAZING! I was on it with a bunch of amazing people (Steve Long, Drew Meyer, Peter David (!!!) R.S. Belcher) it was so fun! We talked about comics, our dream super teams and scenarios! This was probably my favorite panel all weekend, it was just so fun! Once the super heroes panel was over I found some food (wasn't going to even let a migraine have a reason for creeping up oh me that day!) I then headed over to the Roanoke Whovians panel room and sat in on a woman of Doctor Who panel, which was a lot of fun! We talked about the ladies of who, how the Doctor helped and hurt them and how the ladies grew throughout the series. It was great! My last panel for the day was Raising the next Geek Generation! While I do not have a kid, I have taught children for a long time in a school setting, and have gotten a bunch of those kids into genre shows and books, so this panel was really fun to come at from an educator view over the others who were there as parents. A lot of great information on how to get your kids into fandom and how to help them overcome bullies or teasing if they get that in school because of their interests. Once my panels were done I booked it to the room to change for the costume contest judging, changed and got ready in 20 minutes and headed down to judging, judged the costume contest entries, then headed to the actual show! The costumes this year were amazing! Such amazing talent! I had so much fun seeing what people dressed as and how they made and constructed their costumes! Lots of fantastic entries!  I then found out that two of the films that I worked on that were entered into the film fest won awards, Disengaged and Doctor Who: The Ginger Chronicles. 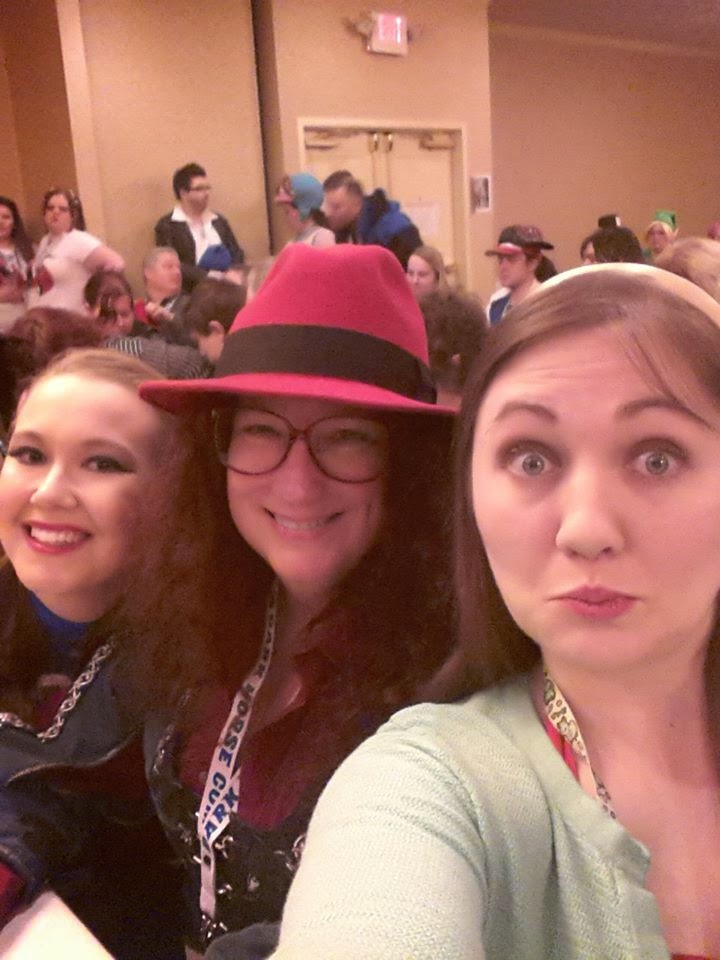 Once all my convention obligations were done I changed and got sushi with friends, it was sooooo good! Then back to the hotel to watch the concerts! Some great musicians, including one of my favorite bands Bella Morte! Which it is always great to see them in concert!
Sunday was a day to visit with friends and get ready to head home, I did not have any panels, so it was more just visiting with people! I headed home midday due to weather that was supposedly happening.

Mysticon was so much fun this year! So many wonderful people and so many amazing events and panels! I cannot wait until next year! This convention is so friendly!