ConCarolinas is a great sci-fi/fantasy convention. I have been going since 2005 (however I used to only go on Saturdays) and have loved every year I have gone! This year I was a panelist and did a lot of fun panels.

Friday: Got to the con and chilled out. I had a panel on begging sewing, which was fun, always cool to talk to people about sewing, or how to get started when you have no idea where to start. Since that was my only panel for Friday I then got some yummy Mexican food and hung out for the rest of the night. Sadly I got my times wrong and missed the G.H.O.S.T. screening (which I am in as well as helped with makeup and wardrobe on).

Saturday: Lots of panels for me on Saturday, we had the Gallifrey Pirate Radio Panel, Doctor Who Season in Review, Game of Thrones, Steampunk Fashion show and the costume contest which I was judging. Didnt get to do too much other than panels on Saturday.  I had a few films play during the film fest (The Gnome Before Christmas, Foodie) but I missed them due to panels. However both films that screened got awards in the film fest!!! Gnome got best kills! (so happy on it winning another award! the first being at the Killride Film Fest in Myrtle Beach). Foodie also got Best Short film (Woooot film I did lots of crazy makeup on!!). After the costume contest I went and sat in on the Porkchop II screening for the first half of the film, then went to find fooooood!

Sunday: Checked out of the hotel.  Had three films play during the film fest (Mr. Bubbles, Splintered, and Chain of Custody), and am acting round table panel.  After the panel we left and got some food before driving home.

Over all the convention was a lot of fun! I got to see friends I had not seen in months! I got to chill out and talk nerdy things on panels!  Can't wait until next year!!! 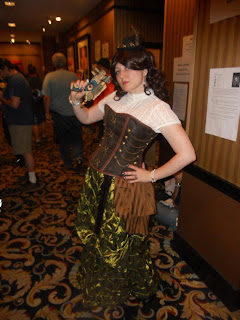