ConTemporal is a first year Steampunk convention held in Chapel Hill! I was so excited for this convention! I love Victorian and Steampunk fiction, clothing, movies, and so on. I was so excited to be asked to come as a costume guest for this convention. I had some wonderful panels:
Friday:
7pm- Doctor Who
8pm- Prop Building
Saturday:
4pm- Cosplay Modeling
7pm- Costume Contest
Sunday:
12pm- Theatrical Makeup

So lots of really fun panels that I got to sit in on!

The convention itself was wonderfully run and  had a great turn out for a first year con! I am so happy it did well since I am really excited to go next year!

So my convention round up!

Thursday: I arrived at the convention hotel (after a short detour since my GPS took me past the hotel, lol) Arrived and met up with some of the lovely ladies I was rooming with! Allegra, Morgan and myself all got ready for the guest dinner and then headed that way. We sat at the table with two gentlemen. One named Ruben, who draws a pretty cool looking comic, and a volunteer named Wookee.  The food was yummy, and the company was awesome! Very fun guest dinner. :)

Friday: Got up and got ready to go and see the sites of the convention.  The hotel was nicely laid out.  They had four or so panel rooms, dealers room, and gaming room. There was an artist alley in the walking area of the hotel and a small concert area where some of the visiting musicians played.  Walked around and checked everything out! Oogled over some of the stuff in the dealers room, even spotted a steampunk short story anthology I did not have... Around 5 I went back and got ready for my panels. For the Doctor Who panel it was Jen. and myself then Zachary Moderated.  It went really well, we talked about Victorian and Steampunk in Doctor Who. The next panel I had was Prop building.  I was on it with Chris, and a husband and wife (whom sadly I cannot remember their names) I was the moderator for this panel. We talked about a lot of different things from customizing nerf guns, to adding lights to props!  Once all of that was over I went and watched the Kilt blowing, then the men's best legs contest! 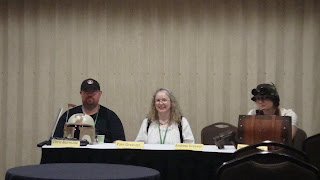 Saturday: The room was up to watch the Legend of Korra season finale! after that we all started to get ready for panels and other events (like me wanting to get Cherie Priest to sign one of my Steampunk anthologies).  I got my book signed! Got some photos with the awesome Fang Fox! then got ready for the modeling panel with Allegra!  We had a really fun panel, brought up people to pose as they would if they were modeling and just shared stories! The it was onto the costume contest! There were around twenty entries, and all were awesome! It was really hard to pick the winners for the contest, so many amazing entries and talent at the con! After the contest went back and took off the boots I had worn for the last two days, chilled out, went to Illogicon's brownie party.  Headed back to the room and ate some pizza, then put on Allegra's gold chainmail bikini and went back out to some of the room parties. Then headed to bed, because I was pretty exhausted! 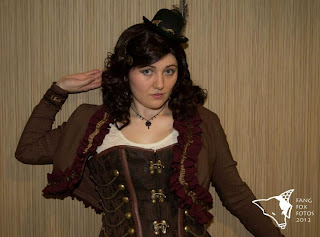 Sunday:
Got up and all packed up then headed to my panel on Theatrical makeup! Had a great time with Jen and Kim on this panel, we talked about different types of body paints, prosthetics and lots of other awesome stuff! After the panel I went and got that one Steampunk Anthology I did not own (yes I have one weakness, books....) and then chilled out, said my goodbyes and headed home. 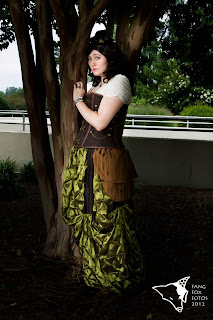 Overall one super AMAZING convention! I had a blast, Thank you ConTemporal for having me out as a costume guest! I had a great time and I am so excited to see what you guys do for nest year!!
Posted by Angela at 10:45 PM