Concerts at DragonCon! The Doubleclicks

Every year I make it a goal to attend some of the great concerts while at DragonCon. The musical artist that they get for the con is one of my big reasons for wanting to attend! For the second year in a row they had The Doubleclicks again, which I adore these two ladies. Their songs speak to the nerd girl in me and let me know that my struggles of growing up as that awkward weird nerd girl, were also faced by others, and in knowing that it gives me a sense of community with my fellow geek ladies. 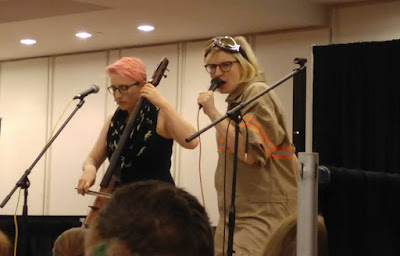 The Doubleclicks is made up of sister duo Angela and Aubrey. They are an awesome, guitar/ukulele and cello wielding duo who occasionally bring on the help of a cat keyboard in their music! They played a great set at the one concert I got to attend at DragonCon, playing songs like "This is my Jam" and "Velociraptor" and also did a really fun cover of the Doctor Who theme on the cat keyboard. They have so much energy on stage and between songs have some really funny banter, since these two girls have a great humor about them and overall just seems like two really cool people. 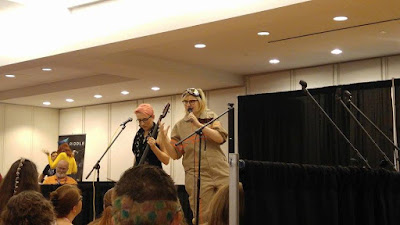 Even cooler Angela was dressed in a ghost busters costume from the new movie, showing how much she supported the new film and liked it! She rocked that costume and the two of them rocked their set at DragonCon that Friday! You can check out these two ladies online here!
Posted by Angela at 12:31 PM