I visited Las Vegas last week, and while I was there I needed some tea to drink for the week, since the Planet Hollywood hotel does not provide tea in their rooms, just coffee. I went to the ABC store hoping they would have the tea they carry in their Hawaii stores, no luck, so I walked around the strip in Vegas looking for tea (within a few blocks of the Planet Hollywood where I was staying).... and this was actually a hard task..... There was a tea shop in the shops at Caesars Palace, that I looked around in, and the people working were no where to be seen, so I ended up at The Coffee Bean and Tea Leaf in the  Miracle Mile Shops in the Planet Hollywood Las Vegas. They had a small but decent selection of teas and I decided on the Apricot Ceylon. 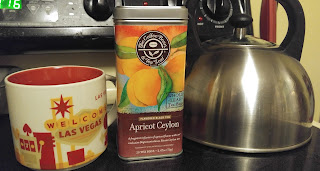 The tea packing is really nice, it has a large 2.47 oz. tin that has 20 tea bags in it. The container says "A fragrant infusion of apricot flavor with our exclusive Bogawantalawa Estate Ceylon tea."

the tea bags are decent sized pyramid bags and they smell amazing. It has a black tea smell with a burst of apricot. Very fruity smelling with a hint of marigold. The taste is strong, so unless you like your tea very strong do not over steep this tea! I added a tiny bit of honey since it needed to be a little bit sweeter for me (which says a lot since I generally don't sweeten my tea.) It had a black tea taste with a hint of apricot when you drank it. 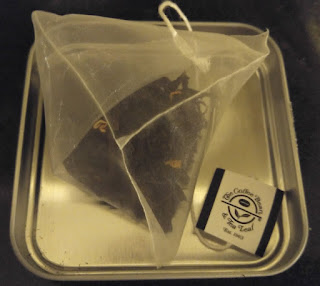 Over all this tea was good, and I was very happy to find something I could drink while I was on my trip in Vegas for Otakon Vegas. It retailed for $11.50 at the shop I got it, but they have it cheaper online here 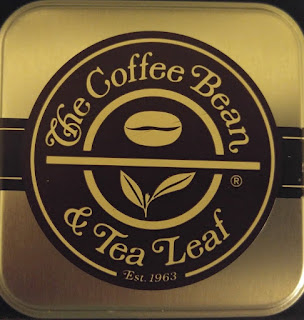